Our Client: Heritage and Modern Design and Develop LLP

Abacus Role:  To acquire the building plot, to assist with achieving planning permission, and to complete the sale of the property prior to structural completion.

In February 2012, we were instructed by our client Heritage and Modern Design and Develop LLP to buy a plot of land in Bank Hall Lane, Hale, upon which a multi-million pound luxury home was to be built.

The plot was within the grounds of an existing large dwelling and was subject to old restrictive covenants which needed to be identified as not being enforceable.

The purchase contract incorporated an overage provision so that, if the property which was to be built on the land sold in excess of a certain figure, an overage payment would be paid to the vendor. The contract was further complicated as the vendor had also submitted a planning application to develop the coach house on their retained land.

It was agreed between the vendor and our client that our client would construct a shared access, together with shared drains and other services. The contract therefore had to incorporate a specification of works for the driveway, the shared services and a causeway, which had to be constructed over a stream.

The plot was purchased on 10 May 2012, and the variation of the planning permission and section 106 agreement were completed in August 2012.

Because of its location, the size of the house and the obvious quality of the construction, buyers became interested in the property well before it was completed. Subsequently, an offer was accepted by our client to sell the property when the shell was finished and the roof constructed. The purchaser was then to finish the construction of the property himself.

This was an interesting case for the Abacus Property team as Keith Mather, Consultant Solicitor at Abacus explains…

“It is rather unusual and even more so in the current market to receive instructions to sell a property of this type prior to structural completion. These particular circumstances raised many issues in terms of the planning permission, building control and Local Authority Building Control (LABC) approval, and of course to ensure that not only were the purchaser and his surveyors satisfied with him purchasing a high value, part-built property, but so too was his funder.”

The property was registered with LABC and had been inspected throughout the construction by the LABC and Building Control. The purchaser had to complete a fresh application with the LABC to ensure that the property was completed to their satisfaction and a final certificate could be issued.

Not all works had been undertaken by our client to the causeway, the driveway and the shared services, so it was necessary to vary the agreement with the original vendor and to obtain positive covenants from the new purchaser to complete the construction of the property in accordance with the terms of the original contract.

Even though the property had not been completed, an overage payment had to be agreed with the original vendor based on the anticipated selling price of the completed unit.

“This was a particularly complex transaction, with a number of obstacles to be overcome before the sale was completed on 1st October 2013.

Because of the interest which was shown in this property, it is quite apparent that there is still a healthy demand for multi-million pound homes in the right location.” 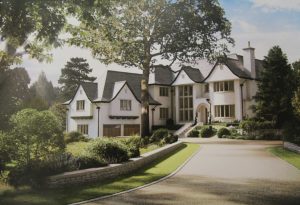